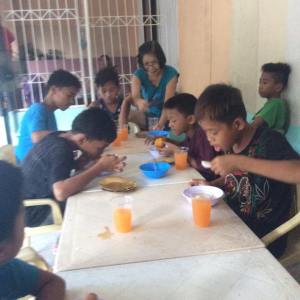 I met Jericho for the first time at Christmas 2013. He was at the orphanage I visited in the Philippines. He was about eleven years old. His mother had dropped him off there a month before I arrived to visit. He didn’t have a father, and apparently his mother felt she just didn’t have the money to care for him. I watched him talking to my mother-in-law. I couldn’t understand the language he spoke, but it was obvious that he felt heartbroken and embarrassed that his mother had left him at the orphanage. I wished I could find his mother and help her find a job so that she could afford to keep him.

As I talked to some of the older orphans who spoke English, I realized how fortunate they were that the orphanage had been built. I had seen kids living on the streets there and it was a sad sight. I just can’t imagine how it would feel to be alone at such a young age. Children are sometimes abandoned and they have to learn how to find food. Some are so desperate that they fall into prostitution.

My mother-in-law (in the photo above) often feeds street kids who wander the neighborhood there. One boy comes to her house often. His father is in jail and his mother spends her time gambling. He sometimes doesn’t have anything to eat during the day so goes to her house and sometimes brings his friend who has no father or mother. Sometimes the meal she gives them is the only food they get all day.

There are children in Wichita, Kansas who don’t get enough to eat. Chances are there are children in your city in the same situation. Some kids have only one parent who might be so addicted that he/she spends all the family money on drugs. The kids can eat at school, but during the Christmas holiday they have nothing to eat. I have friends here who buy food and donate it to the social workers at the schools so that the kids can bring food home during the holidays.

Want to help street kids? There is so much that can be done. You can pray, donate or volunteer. We need people who are willing to spend some time on social media like Facebook, Twitter, blogs, etc. to get the word out about this problem. Click here for more information.