Why your happiness depends on faith 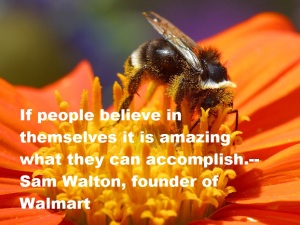 Christians and atheists both believe in the power of faith.

Back when there was an East and West Germany, East Germany had the highest number of Olympic gold medals per capita. They had secrets they used to train the athletes. Basically, they built the athletes faith. Every knows that if you really believe you will win the prize, you are more motivated to work hard for it. A person who believes they have no chance of winning a gold medal, or even a bronze, will not work hard to train for the Olympics. I don’t feel I have any chance of winning a gold, so I don’t even try. But give someone faith that they can win the gold, and they will work very hard.

If a person really believes (has faith) he can succeed, he is more willing to work hard to achieve the goal, no matter what it is. He has to really love the idea of winning also. So you can say faith and love are two of the keys necessary.

What does this have to do with happiness?

Everyone has goals and dreams in life. Many decide they will set very low goals because they don’t have the faith to try for bigger goals. Most people who don’t enjoy life don’t realize that they lack happiness because they have allowed negative thinking in their minds for years. Fear, anger, guilt, depression are all negative thinking. All unhappy thoughts fall into those four categories. For example, worry is a kind of fear. Frustration is a mild form of anger. All of these negative emotions cause toxic chemicals to be pumped into the bloodstream.

Programed to see the negative

It has been said that the mind can made a hell out of a heaven and a heaven out of hell. That means a person can be in very good circumstances, but they feel they are in bad circumstances. A man had a great job, but wasn’t grateful for it and hated it, later he lost his job. A woman had a good husband, but was not grateful for him and later lost him because she separated from him to teach him a lesson and he never came back to her.

People can reprogram their minds to focus on the positive, happy things in life. If they are with a complainer they can leave or gently tell the complainer that talk like that isn’t helpful for happiness. They can quit being overwhelmed by negative stories in the news. It is good to be informed  but not inundated with negative stories.

One of the most powerful things to do is to think about things you are grateful for first thing in the morning. It sets the mood for the entire day. if you feel yourself losing joy, just count your blessings again. Thank God for all the good things you have, they outweigh the bad a hundredfold.