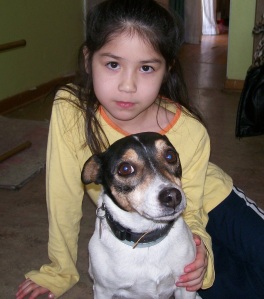 A man was passing through a small town and decided to stop for a soft drink. He parked and got out of his car. In front of the store was a girl, about 8 or 10 years old and a dog. The man was impressed by the dog and asked

“Sweetie, does your dog bite?”

The man reached down to pet the dog and suddenly the dog lunged and bit his hand.

“I thought you said your dog doesn’t bite!” the man cried out.

“That’s not my dog” the girl answered.

It was summertime and a man walked past several boys with a dog. “What are you boys doing?” he asked.

“We are competing to see who wins this dog as a prize. Whoever tells the biggest lie gets to keep the dog.” One of the boys said.

The man was shocked at the morals of these young boys, competing to see who could tell the biggest lie. He decided he would do his good deed for the day and encourage them to find a more honest way to compete for the dog.

“Boys, it’s not a good idea to tell lies. Why, when I was a boy I became a Christian at an early age and I didn’t tell lies after that. In fact, I was so blessed by the Lord that I became a preacher.” He talked and talked, going on and on about how bad it is to lie and how he didn’t do that kind of thing. Eventually he paused to see if he had any effect on the boys. They were staring at him with strange expressions on their faces.

“OK, give him the dog. None of us can tell that big of a lie!” one of the boys said.