The magic of believing 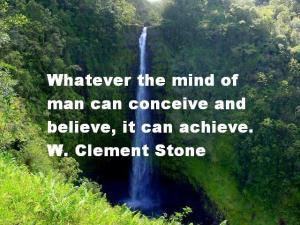 Claude Bristol wrote a book called The Magic of Believing. In it he expands upon the idea of Positive Mental Attitude, Power of Positive Thinking, or as Jesus called it, faith. Bristol noted that to achieve goals and dreams, it takes more than just hard work. Many people have worked very hard and never achieved their goals. Other people seem to magically achieve their goals.

Arnold Schwarzenegger talks about the power of faith, of visualizing a goal and working for it to achieve it. Tomas Edison talked about the amazing powers of the mind. The outstanding scientists Steinmetz, Tesla (invented AC motors and over a hundred other of today’s most useful inventions) and Marconi (invented the radio) all agreed that there was something very powerful in the mind, call it faith or something else, that could bring about amazing results.

Bristol studied the science of faith and taught it to some of his workers when he was a vice president. “All of the employees sat around in a half circle and as I began my remarks, I asked each man to provide himself with paper and pencil.” He told them to write down whatever it was that they most wanted in life. He told them that he would explain to them how to get it.

Some of the men laughed but Bristol told them to do it or lose their jobs. “If this stuff doesn’t work, we’ll all be out on the street.”

One of the men who laughed apologized later, but said that the idea of writing down a goal and learning how to make it happen in such a way seemed unreasonable.

But the amazing thing is that in the years that followed, Bristol asked all of the men if they obtained what they had written down. “Without exception, every man had. One had wanted a wife of a certain nationality. He got her, and there are two fine boys in the family. Another man put down the figures of a very sizable fortune. He got it. Another man wanted a beach cottage, and other a better home and so on. Steadily through the years every one of these men has constantly made money, many of them averaging monthly more than they had ever made before in their lives, much to the astonishment of many others in the same line of business.” Page 167 The Magic of Believing by Claude Bristol

What was it that Bristol taught these men? It was the power of faith, of believing. It is the same stuff that I constantly blog about in this website. Jesus said “Everything is possible for one who believes.”